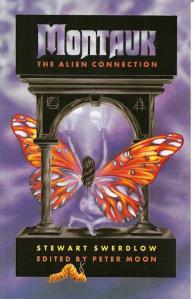 As the new millenium unfolds, countless stories of alien abductions have begun to penetrate the mainstream consciousness of Mankind. While some new insights into the human condition have been obtained, too few of these accounts have brought such experiences to a level where they can be consumed and digested into a profitable understanding for the individual reader. Montauk: the Alien Connection unravels the remarkable story of Stewart Swerdlow, a gifted mentalist who has experienced extrasensory perception since birth. Stewart%u2019s rare abilities not only made him a magnet for government surveillance, but his unique genetic structure made him a clearing house for different alien agendas which sought him out for their own purposes. Everyone%u2019s sinister plans went haywire after Stewart began a deprogramming procedure with Preston Nichols which was designed to clear his memories and the controlling influences which had been installed. Stewart was subsequently threatened and eventually jailed after refusing to comply with orders to sever his ties with Nichols. Despite this, the truth began to work its way into his life. Estranged from his family, Stewart was sent to prison as a financially destitute and hopeless, tragic figure. Despite a severe human struggle, he was able to call on his own God-given abilities, reshuffle the deck, and reevaluate his life and the various agencies and entities which sought to utilize him. Weeding out the most negative influences, Stewart was able to receover key memories and discard those forces which sought to entrap him. The most intriguing aspect of his incredible story is that he has a valuable legacy to share. 256 pages, ISBN 0-9631889-8-4, $19.95