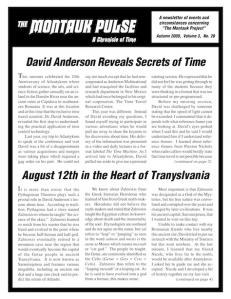 Since "The Montauk Project" was published in 1992, there have been many interesting developments and several sequels chronicling the investigation to determine whether or not the Montauk Project did, in fact, exist. Preeminent in this quest has been the Montauk Pulse, a quarterly newsletter that has been written by Peter Moon since 1993. It has never missed an issue, and there has never been a lack of interesting things to report upon, and these include Peter Moonï¿½s adventures with Dr. David Anderson, a scientist who has excelled in understanding the actual mechanics of time and has made remarkablebreakthroughs with time control technology. Dr. Andersonï¿½s work is all based upon hard science. The Montauk Pulse also cover topical issues concerning Peter Moon's investigations that also include his adventures in Romania and the phenomena surrounding the Romanian Sphinx.