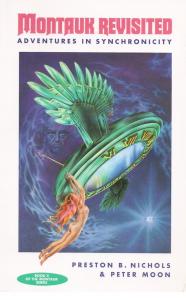 When Peter Moon researched the remnant trail of this mysterious time travel project, he encountered incredible and unprecedented experiences in synchronicity which ultimately unmasked many of the occult forces that were behind the technology used in %u201CThe Montauk Project%u201D. Following the trail of these %u201Ccoincidences,%u201D Peter Moon reveals an enigmatic occult tapestry which leads from the mysterious associations of the Cameron Clan to the genesis of American rocketry and the magick of Aleister Crowley, Jack Parsons, and L. Ron Hubbard. The Montauk investigation carries forward as Preston Nichols tells the bizarre history of the electronic transistor as he opens the door to Peter Moon and unleashes a host of incredible characters and new information. A startling scenario is depicted that reaches far beyond the scope of the first book. Illustrations and photos are included. 256 pages, ISBN 0-9631889-1-7 $19.95