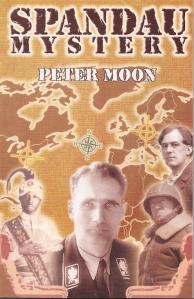 A historical novel by Peter Moon which reveals how the mysterious deaths of General George Patton and Deputy Fuhrer Rudolph Hess were intertwined through the Nazis secret flying saucer technology.Directed by Tibetan elders, the Germans sought to harness the Vril, an energy so powerful that it can change the very nature of the elements themselves. To succeed, however, a major change was required in the evolutionary development of the human species. A dramatic scenario of events unfolded, however, which not only ensured that this endeavor was sabotaged but included an undertaking designed to prevent humanity from ever discovering its ancient heritage and the secrets of the Vril. It was against this backdrop that two of the most colorful characters of World War II, Rudolph Hess and George S. Patton, became immersed in an age old battle involving the legions of light and darkness. The end of World War Two precipitated more intrigue and struggle for power than the war itself. Much of this centered around the secret projects sponsored by Rudolph Hess which included not only the Antarctic project but the construction of Vril flying saucers. Pattons job, as the war came to a close, was to recover the secret technology of the Germans and safeguard it for American use. After accomplishing his mission and compiling a German history of the war, General Patton was killed in a dubious accident, the mystery of which has never been solved and has been magnified by government refusal to declassify the file on the investigation of his death. Far more conspicuous and powerful than Patton was Rudolph Hess, the Deputy Fuhrer of Germany, who flew to England in 1941 as an envoy of peace and was imprisoned for life and suspiciously killed just before his imminent release. The current of intrigue and power which permeated these two individuals and led to their downfall was the same current which led to a repatriation of the U.S. Government and an undermining of a constitutional government that is run by and for the people. Besides technology, much of this intrigue centered around the banking files the Nazis confiscated from the Freemasons. The effort to keep this secret is still a factor in todays politics. It was thus that Patton and Hess wore different uniforms but shared common interests and held within their grasp a force so powerful that, if harnessed, it might raise the ancient civilization of Atlantis itself. It was for this power that both were killed and so begins our mystery. Spandau Mystery is an historical novel and murder mystery featuring 350 pages of fast and easy reading which penetrates one of the greatest intrigues surrounding the Nazis and their occult interests in Tibet: the ancient Dropa civilization, a group of little people who claim to descend from the stars and whose corroborating artificats have been studied by scientists for over half a century. If you would like a new view of world history, order and read this book today. 350 pages, $22.00, ISBN 978-0-9678162-4-1