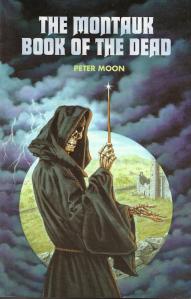 The Montauk Book of the Dead

The Montauk Book of the Dead More Details

A tale of the intrigue and power which hovers over the most sacred kernel of our existence: the secrets of life and death. Beginning with his early years, Peter Moon reveals fascinating details of exactly how he became involved with Scientology and serendipitously ended up working in the personal employ of L. Ron Hubbard aboard the latter's famous "mystery ship" which was called the Apollo. Included in this riveting account is the story of how L. Ron Hubbard, at the age of twenty-seven, clinically "died" only to discover that he could "remote view." From this state of consciousness, which would later be called "exterior," he was able to access what he termed the answers to all of the questions that had ever puzzled philosophers or the minds of men. Transcribing this information into a work entitled "Excalibur," which is still under lock and key to this day, he developed one of the most controversial movements in history: Dianetics and Scientology. The truth and import of the above can only be evaluated by the all out war which was waged by governmental forces and spy agencies to obtain the legally construed rights to the above mentioned work and all of the developments and techniques that ensued from it. Thi is the personal story of Peter Moon which not only pierces the mystery of death and reveals fascinating details of his years aboard L. Ron Hubbard's mystery ship but gives the most candid and inside look ever at one of the most controversial figures in recent history. 451 pages, $29.95, ISBN 978-0-9678162-3-4