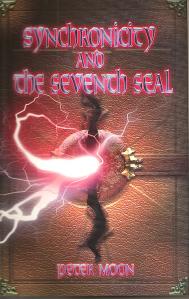 This is Peter Moon's consummate work on Synchronicity. Beginning with a brief scientific description (for the layman) of the quantum universe and how the quantum observer (the spirit) can or does experience the principle of synchronicity, we are taught that synchronicity is also an expression of the divine or infinite mind. Besides exploring the concept and influences of parallel universes, this book includes numerous personal experiences of the author which not only forges a pathway of how to experience and appreciate synchronicity, but it goes very deep into the magical exploits of intriguing characters who sought to tap the ultimate powers of creation and use them for better or for worse. This not only includes the most in depth analysis and accurate depiction of the Babalon Working in print but also various antics and breakthroughs of the various players and that which influenced them. These characters include the legacies and personas of Jack Parsons, Marjorie Cameron, L. Ron Hubbard and Aleister Crowley. Peter Moon adds exponential intrigue to the mix by telling us of his personal experiences with these people and their wake which leads to even deeper encounters which penetrates the mysterious legacy of John Dee. Eventually, this pursuit of synchronicities leads Peter Moon to a most intriguing and mysterious encounter with Joseph Matheny, an adept who has not only had similar experiences to Peter, but has his own version of a space-time project known as Ong's Hat. Matheny has not only had incredible synchronicities himself, he created one of the highest forms of artificial intelligence known to man, a computer known as the Metamachine which is designed to precipitate and generate synchronicities. These many synchronicities lead to the books climax, a revelation of the true Seventh Seal. The proof is delivered. No theologian nor anyone has even tried to counter the claim. 455 pages, $29.95, ISBN 0-9678162-7-0