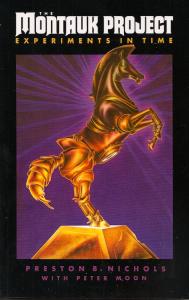 The Montauk Project: Experiments in Time

Chronicles the most amazing and secretive research project in recorded history. Starting with the "Philadelphia Experiment" of 1943, invisibility experiments were conducted aboard the USS Eldridge that resulted in full scale teleportation of the ship and crew. Fourty years of massive research ensued, culminating in bizarre experiments at Montauk Point that actually tapped the powers of creation and manipulated time itself. The Montauk Project bridges the modalities of Science with the most esoteric techniques ever imagined and finally catapults us to the threshold of the stars. We all know something is out there, but we're not sure exactly what. This book, at long last begins to provide some solid clues. 180 pages, ISBN 0-9631889-0-9 $15.95