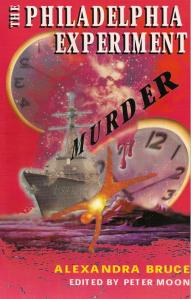 The Philadelphia Experiment Murder: Parallel Universes and the Physics of Insanity

The Philadelphia Experiment Murder: Parallel Universes and the Physics of Insanity More Details

An added edition to the intriguing series by Sky Books which exposes the truth about the conspiracy to manipulate time itself. This book, edited and contributed to by Peter Moon and authored by Alexandra Bruce, begins with the tragic murder of conspiracy lecturer Phil Schneider. An investigation of this murder exposes a massive cover-up by authorities and reveals astonishing information, the trail of which leads back to the Philadelphia Experiment of 1943. Before his assasination, Schneider lectureed across the country and released documents connecting his father to the U.S.S. Eldridge. Additionally, his father claimed to be a Nazi U-boat captain who, after being captured by the Allies, was recruited as a medical officer and served as a Senior Medical Officer to the crew of the Eldridge. More haunting was the discovery of gold bars in his fathers possessions with Nazi insignia. The Philadelphia Experiment Murder investigates these circumstances and uncovers a host of new characters including Preston Nichols actual boss from the Montauk Project. Startling truths are revealed which lead to an examination of parallel universes and the nature of insanity itself.