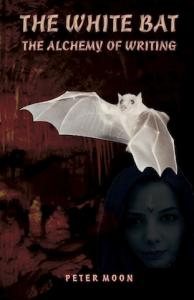 NEW: The White Bat - The Alchemy of Writing by Peter Moon

NEW: The White Bat - The Alchemy of Writing by Peter Moon More Details

The dream state meets reality in this true life personal adventure which is one of Peter Moon's most mysterious experiences in synchronicity that is centered around his dream of a white bat in 1989  long before his legendary involvement with time travel and synchronicity. Told in a personal narrative, this book syn- thesizes the dream process with the creative process and teaches you to do the same as it integrates the emergence of ancient Tibetan texts with the remarkable discoveries of a holographic chamber beneath the romanian Sphinx, the legacy of the Tomb of Bastet in Bulgaria, and tunnels of pure gold beneath Sarmizegetusa in Transylvania. The dream - the details of which are reviewed in this book and was prophetic in nature, climaxed with a white bat manifesting at Draculas Citadel. Before his sixth journey to Romania, an annual sojourn Peter Moon has made since 2008 in pursuit of the mysterties presented by Radu Cinamar in the Transylvania book series and summarized again within these pages, Peter realizes that the dream had been pulling him to Romania long before his involvement with time travel, Preston Nichols, Dr. David Anderson or even before he began his public writing career. Now, upon his arrival in Transylvania in 2013 and twenty-four years after the dream, Peter is spontaneously informed that a white bat had unexpectedly just appeared in a cave sacred to the blue goddess Machandi, a tantric dakini who gave Radu Cinamar a terma  a hidden treasure in the Tibetan tradition. This terma has unleashed a series of apocalyptic events revealing that there are ancient artifacts and mile long tunnels of pure gold beneath Sarmizegetusa, the ancient capital of Transylvania, all of which has commanded the attention of the worlds political and military elite as it holds the keys to the destiny of Mankind. The appearance of the white bat, identified as a totem of Machandi, reveals a remarkable personal story of how the dream state shapes reality as well as the destiny of an entire nation and its new role in the world. 224 pages, ISBN 978-1-937859-15-2