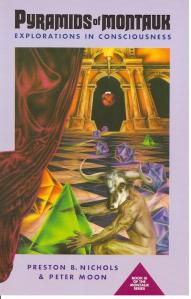 Pyramids of Montauk: Explorations in Consciousness

An astonishing second sequel to The Montauk Project and Montauk Revisited awakens the consciousness of humanity to its ancient history and origins through the discovery of pyramids at Montauk. A full examination of the mysteries of the pyramids at Montauk Point reveals that the Montauk Tribe were the royal family of Long Island and that they used the name Pharaoh as a designation that connected their heritage to ancient Egypt and beyond. The discovery that these pyramids were placed on sacred native American ground opens the door to an unprecedented investigation of the mystery schools of earth and their connection to Egypt, Atlantis,Mars and the star Sirius. This book explains why Montauk was chosen as a select location for pyramids and time travel experimentation. A further examination of sacred geometry awakens the consciousness of humanity to its ancient history and origins. Preston Nichols also fascinates us with an update on covert operations that includes the discovery of a nuclear particle accelerator and the development of psychotronic weapons. The Pyramids of Montauk stirs the quest for the end of time as we know it. Includes photos and illustrations. 256 pages, ISBN 0-9631889-2-5, $19.95