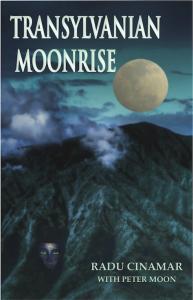 Transylvanian Moonrise: A Secret Initiation in the Mysterious Land of the Gods

Transylvanian Moonrise: A Secret Initiation in the Mysterious Land of the Gods More Details

Radu Cinamar rose to prominence for his role in exposing the most remarkable archeological discovery in the history of Mankind: a secret chamber beneath the Romanian Sphinx containing holographic records of Earths history, bio-resonance imaging technology, and three mysterious tunnels leading to the deepest secrets of the Inner Earth. Despite the political intrigue, turmoil and restriction around this great discovery, the leader of the expedition enabled Radu Cinamar to visit and explore these artifacts. Ever since, Radus life has been a labyrinthine adventure of strange events, clandestine liaisons and extraordinary people and circumstances. In Transylvanian Moonrise, Radu is sought out by the mysterious Tibetan lama who orchestrated this discovery while working under an alias as Dr. Xien, a secret agent for the Chinese government. His meeting with the lama which is arranged by a mysterious alchemist whose ancestors have lived for hundreds of years by pursuing a secret tradition of the Great Work which prolongs life indefinitely until one can evolve beyond the physical plane. The enigmatic lama introduces Radu to a creature known as a yidam, an energetic and physical being created by a sand mandala ritual. After revealing how he set the aforementioned events in motion in order to fix major imbalances in the Earth, the lama and the yidam take Radu on a mystical journey from Transylvania to the mysterious Land of the Gods in Tibet where he receives a secret initiation from the blue goddess Machandi. Journey into this land of mystery and path of initiation and discover what really hides behind the veils of illusion known as the truth. Transylvanian Moonrise: A Secret Initiation in the Mysterious Land of the Gods is not only a remarkable story, but it is an initiation of the highest order that will take you far beyond your ordinary imagination in order to describe events that have molded the past and will influence the future in the decades ahead... Retail price $22.00 ISBN 978-0-9678162-8-9