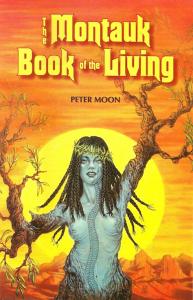 The Montauk Book of the Living

The Montauk Book of the Living More Details

A stunning new book by Peter Moon that tells how his research into the Montauk Pyramids led to the discovery of a mysterious quantum relic. This relic not only led to the Matriarch of the Montauk Pharoahs but has opened the door to understanding the greatest mysteries of history. These include the occult biochemistry of an Amazonian Blue Race which founded the Egyptian culture and honored the feminine principle through the star Sirius. These truths lead to the unveiling of the biological truth behind the Virgin Birth and how this theme intertwines with the descendants of these Amazons who live today and are known as the Blue People of the Saha ra. Other occult surprises include new revealations concerning Aleister Crowleys The Book of the Law that demonstrably reveals that the ancients who built the pyramids of Cairo and Mars knew deeper secrets concerning DNA that our scientists of tod ay. The pursuit of these various threads leads to Peter Moons encounter with Red Medicine, the Medicine Man of the Montauks who is destined to fulfill the Second Coming of the Pharoahs, a time prophesied by native elders which signals the return of ancient wisdom, universal brotherhood and healing . This is also the riveting personal story of Peter Moon which includes new streams of synchronicity that include the mystical background behind the events which led to the revelation of the Montauk Project. Old themes are revisited and more deeply explored, but there are more new twists and turns than ever. The legacy of the Montauk Pharoahs is explored as never before and leads to more truth than can be readily believe which is designed tolaunch a new era once prophesied by Native Elders as the Second Coming of the Pharaohs, said to signal the return of ancient wisdom, universal brotherhood and healing. 384 pages, $29.95, ISBN 978-0-9678162-6-5